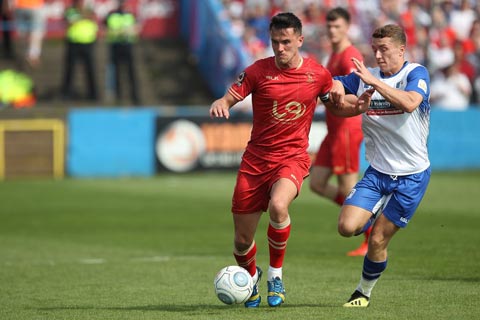 Barrow vs Hartlepool have seen under 1.5 goals scored in 3 of their last 4 meetings.

For the fourth time in overtime, they lead the scoring but do not win. The decisive mistake of right back Brown in the end, cost the chance to take one point from the match against Woking.

“We live in Groundhog Day,” Ian Evatt said, referring to the well-known comedy starring Bill Murray. Defending problems seem to be unsolved so far and are largely responsible for team’s downward. This must added to the natural inefficiency which is obvious in scoring.

This is how they are currently in a relegation zone. Based on their good home results they search for a return to victories that will give them a breath. Newly acquired Platt’s debut is expected to be done tonight. He returned to Barrow after signing on loan until the end of the season from Championship club Blackburn Rovers.

Match News: All problems are from along time before.

Barrow vs Hartlepool Bet Info: Barrow’s 4 of the latest 5 matches were btts and over 2.5 goals.

Historically high is their 9th position in the standings after a home win over Torquay. Their undefeated run now is three games. Hartlepool could have been unleashed earlier if they were better in the final effort. However, the golden goal came with a diagonal shot by defender Peter Kioso (80 ‘).

Craig Hignett dedicated the victory to the 226 Hartpool’s fans who traveled about 500 kilometers to be with their favorite side. He also mentioned that as long as his players play with passion in the field, the team cannot be afraid of anybody.

The bad news comes from the medical team. Midfielder Molyneux has undergone surgery and will be out of action for about three months. Although in fact his absence has no immediate impact, as he is missing from the start of the season.

Match News: Since the beginning of the year, Molyneux (midfielder) and Williams (midfielder) are absent. Defender Anderson (1/0) logically will be out while Kabamba (4/0) and Muir (4/1) are in doubt.

Barrow vs Hartlepool Bet Info: Hartlepool‘s 4 of the latest 5 matches were btts and over 2.5 goals.