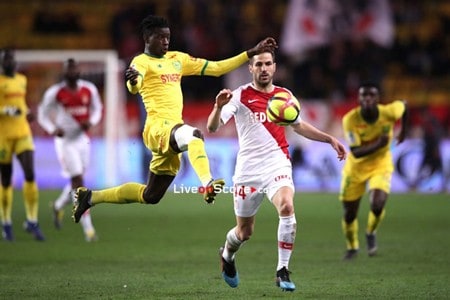 Monaco vs Nantes will take place at Stade Louis II.

They made an ideal start for the season during the week. Monaco prevailed 2-0 at Prague against Sparta and did the first step towards qualifying for the UCL playoffs. They were preceded in the 37th minute by Tchouameni and in the 59th minute the goal of Volland followed. This appearance was a message for everybody that this year Niko Kovac’s team has high aspirations.

The team from the Principality comes from a season where they did the best they could. Monaco were aiming for the European competitions and managed to finish 3rd with 78 points, claiming the championship until the end. They made good moves in the transfer market. They took the young defender, Jakobs from Coln, the excellent goalkeeper of Bayern Nubel and the excellent midfielder Jean Lucas from Lyon.

They come from a season where they avoided relegation in the last match of the year. Specifically, in the last match they could avoid to play the play-off matches just getting a point against the indifferent Montpellier, but they lost 2-1 at home and remained at 40 points. They played against Toulouse. They won 2-1 away, lost 1-0 at home and eventually remained in the category. The coach, Antoine Kompouare, continues on their bench. In yesterday’s press conference he set the goal, clearly saying that “Our goal is to avoid relegation as soon as possible and then we will look for something more”.

Transfer moves have plus and minus. The important midfielder Louza left for Watford. Lafont also left for Fiorentina. The borrowing of Cyprien (M) from Parma stands out from the arrivals. Friendlies had their ups and downs. They defeated Guingamp (1-0) and Brest (3-1), but lost to Caen (1-0), Niort (1-0), Lorient (1-0) and Clermont (2-1).

Monaco is a clear favorite due to both team capacity and tradition. However, odds for Monaco’s win are very low and not worth betting on. On the contrary, we are interested in the over 2.5 goals and we will bet on that.