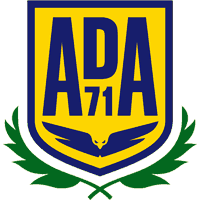 Agrupación Deportiva Alcorcón SAD is a Spanish football team based in Alcorcón, in the autonomous community of Madrid. Founded in 1971, it currently plays in Segunda División, holding home matches at the Municipal de Santo Domingo, with a 6,000 seat capacity.

Founded in 1971 by Dionisio Muñoz Jerez, Alcorcón spent roughly its first 30 years of existence in between the fourth division and the regional leagues. In 2000–01, it made its Segunda División B debut, finishing in 12th place, and spending the following seasons immersed in mid-table positions.

In 2008–09, a third place in the regular season meant Alcorcón was allowed to appear in the promotion play-offs for the first time in its history. After disposing of Sant Andreu and Alcoyano, the club was ousted by Real Unión of Irun in the final round with a 3–1 aggregate scoreline.

On 27 October 2009, Alcorcón secured the most famous victory in its history after it defeated La Liga powerhouse Real Madrid 4–0 at home in the first leg of its round-of-32 match in the Copa del Rey.[2] In the club’s first ever official match against a team from the top flight, its opponent fielded nine international players in its starting eleven: Jerzy Dudek, Álvaro Arbeloa, Raúl Albiol, Christoph Metzelder, Royston Drenthe, Mahamadou Diarra, Guti, Esteban Granero, Raúl, Rafael van der Vaart and Karim Benzema, with Ruud van Nistelrooy, Fernando Gago and Marcelo appearing as substitutes in the second-half.[3]

On 10 November, in the second leg at the Santiago Bernabéu, the club lost 1–0, but won 4–1 on aggregate, thereby going through to the next round of 16,[4] where the club was ousted by Racing de Santander, 2–3 on aggregate.

Following the Alcorconazo, in the 2009–10 season, Alcorcón was finally promoted to level two after defeating Pontevedra (3–0 on aggregate) and Ontinyent (4–3 on aggregate) in the promotion play-offs. Since the club is in the second tier, the club played twice the promotion play-offs being defeated by Real Valladolid in the final of the 2012 edition and by Girona in the semi-finals of the 2013 edition.

In 2017, Alcorcón qualified to the Copa del Rey quarter-finals for the first time in their history after a penalty shoot-out victory over Espanyol, but were beaten 2–0 on aggregate by Alavés.